As companies begin their digital transformations, many seek to reduce the “QA” job function; in its place, companies are now asking Developers to test their own work to help improve cost and speed in downstream testing.

This trend has often exacerbated the need in software development to always be releasing products faster.

So, is there still a place for traditional Test teams in DevOps? If the answer is yes, what steps can organizations take to ensure that all teams are properly supported on their mission to contribute to quality while still releasing as fast as possible? 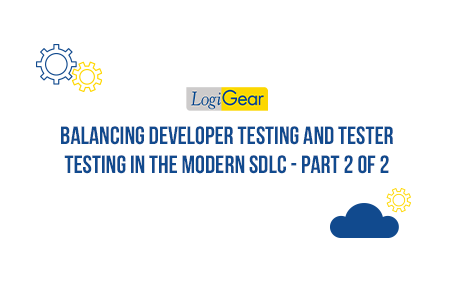 What this new era of testing will look like, including:

Watch this webcast with LogiGear Co-Founder, Michael Hackett, as he discusses how to effectively balance Developer Testing and Tester Testing in his newest 2-part webinar series

LogiGear has helped countless businesses for more than 27 years optimize their testing. Get in contact with our team of experts and see how LogiGear can help you achieve success in your testing.